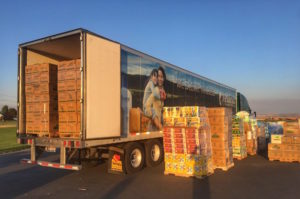 IDAHO FALLS — The mission of Melaleuca is to enhance lives and CEO Frank VanderSloot says that’s just one reason why his company does so much to help others.

Melaleuca was honored by the American Red Cross of Greater Idaho Thursday during the organization’s annual East Idaho Real Heroes Event. Hundreds gathered for the luncheon at the Waterfront in Idaho Falls.

Over the years, Melaleuca has donated millions of dollars and products to flood, earthquake, wildfire, hurricane and tornado victims.

“If you can get there right away, as soon as it happens, you can have opportunities presented to you that nobody else has,” VanderSloot says. “It’s all about being on the ground.”

VanderSloot was on the ground days after Hurricane Katrina hit Louisiana in 2005. That’s when he met the Crawford family in a New Orleans shelter.

“We took food and everything that we could get in grocery carts and took it to this shelter,” VanderSloot recalls. “One of the families, Terrence and Trulisha Crawford and their two little kids, they had no place. Their home was destroyed. We asked them if they wanted to come with us back to Idaho with us they said, ‘Where’s Idaho?’”

The Crawfords quickly learned – moving in with the VanderSloots and living with them for two years.

“The whole Idaho Falls community embraced them. That’s why they stayed so long. They loved it here,” VanderSloot says.

Melaleuca hopes to make that kind of impact with every person they help and such was the case with Hurricane Harvey.

More than 3,000 people were left homeless in Texas and with the help of the American Red Cross, Melaleuca organized a supply drive in Idaho Falls. The goal was to fill one semi truck, but so many people donated that in just a few hours, two packed trucks were on their way to Houston.

Dawn Davis, a Texas resident from Idaho Falls, was stranded in eastern Idaho after the hurricane. She showed up at the supply drive and was stunned at the outpouring of love.

“I’m so touched by what I’m seeing here in Idaho Falls,” Davis said at the time. “This is my home town and to know that they’re giving back to the town I now live in – I’ve just watched car after car after car and I didn’t know it would have this effect on me.”

Over the last year, Melaleuca has worked with the Red Cross to send pallets of cleaning products, ointments, first aid supplies and food to wildfire and flood victims.

And when Hurricane Maria destroyed Puerto Rico in 2017, VanderSloot arranged for his plane to be sent to the island.

“We flew in generators and beef jerky and cash so they could do transactions because their credit card systems were all down,” VanderSloot says.

Once the supplies were dropped off, VanderSloot tweeted that he was offering a free flight for those who needed to leave. Blanca Figueroa jumped at the chance and had one hour to get to the airport.

“I feel highly blessed. I believe in miracles and I know the Lord answered the prayer of my son,” an emotional Figueroa said after landing in Idaho Falls.

An untold number of prayers have been answered over the years with the help of Melaleuca and when the next disaster strike, chances are The Wellness Company will be on the way.

“When you see somebody needs help, you reach out and try to help them,” VanderSloot says. “That enhances your life and if you don’t do that, I think you miss all the blessings that go along with the opportunity you had when you missed it.”